Something is always happening at SHIM

Tribune-Review —Daruka Nyuon strutted across the dreary, cluttered porch at her Whitehall housing complex in her vibrant purple, orange and green dashiki, a traditional African dress worn in her Sudanese homeland. 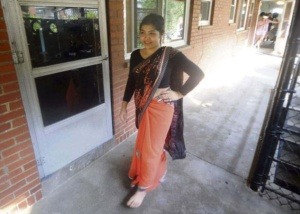 Priyanka Neupane shows off her clothing from Nepal, Friday, June 24 during a fashion show rehearsal at SHIM’s Prospect Park Family Center in Whitehall.

As she flipped her hair to the side and let out a confident grin, her friends shouted with approval: “Oh, someone watches ‘America’s Next Top Model.’”

Nyuon’s smile grew bigger as her friends began to walk along the same path — each in their own native garb.

“Everyone has a different culture,” said Nyuon, 19, a native of South Sudan, whose family faced religious persecution and was forced to move to from their homeland to a refugee camp in Kenya when she was two months old. “When you’re wearing these clothes, it makes you feel like you’re at home always. I haven’t been there in 10 years so I need to go back soon.”

A large population of former refugees from around the world now living in the Whitehall Place housing complex are not always welcomed by Americans in their new country, said South Hills Interfaith Movement youth mentoring coordinator Susie Backscheider. Wearing their native clothing or speaking the language from their homeland often comes with questions, and sometimes ridicule.

“Even when they’re at school, sometimes they hear, ‘Go back to your country,’ terrible things that maybe the kids at home heard their parents say and they’re just repeating it. But they definitely want to fit in and they want people to understand them, but it’s not always easy,” Backscheider said. “Americans might not understand why they’re here or that they can’t go back to their country because they don’t have a country.”

Youth from SHIM’s mentoring program created a “Cultural Fashion Show” in hopes of sharing the traditions and clothing of their homelands with people in the South Hills and gaining more acceptance, Backscheider said. The program received a $500 Sprout Fund “The Change Machine” grant and will be held on Friday in Bethel Park.

About 30 former refugess, sixth grade through college age, will share their culture and fashions, in hopes that people will learn more about their culture, Backscheider said.

Whitehall has had a large population of refugees dating to the 1990s. The latest U.S. Census showed that 13.4 percent of Whitehall’s 13,139 residents older than age 5 speak a language other than English at home, nearly 3 percent higher than the state average. About 9.2 percent of residents speak an Indo-European language at home.

The latest influx to the region is natives of Bhutan, who lived in a refugee camp in Nepal for many years.

Adjusting to life in America is hard for the refugees, said Sunita Bista, 18, who was born in a refugee camp in Nepal.

Not only are they new to the country, but people often look at them funny if they’re wearing their native garb or talking in their native language, said Bista, who moved to the U.S. in 2009 and graduated from Baldwin High School this year. She plans to go to school to become a nurse. Her family are natives of Bhutan.

“Maybe after this some people will be more open to us, more open-minded, after hearing our story from back in our country and what happened to us,” she said.

In Nepal, people often wore jeans and T-shirts just like here, but the styles were much different, Bista said, as she showed off a Nepali kurta, or traditional dress, with a shawl draped over her shoulder. Those dresses are only worn at important events, or by the elders, many of the youth said.

“I’m pretty sure our ancestors back in the day would wear this every day, but now we wear just a T-shirt and jeans, but on a special occasion we wear this,” said Mary John, 16, who will be a sophomore at Baldwin High School this fall.

John, whose family are natives of Burma, was born in a refugee camp in Thailand. She wore a native Karen dress.

“Our culture is part of us,” she said.

In America, John said, she was surprised by one fashion trend: “bikinis.”

“I didn’t see them anywhere when I was in Thailand. People wore shirts and short pants in Thailand to go swimming,” she said. “When I came here, I was like, That’s weird.’ But I got used to it.”

Hser Mular Doh, 15, who will be a junior at Baldwin High School this fall, said she was surprised that students don’t wear uniforms in school here.

Some trends from their homelands are taking off here.

Nyuon, a student at Penn State New Kensington who plans to go into nursing to help the kids in her country, said the African dashiki can be worn by anyone.

“All Africans are wearing it. I ordered it online from Amazon,” she said. “You can wear it anywhere basically, if you want to go out. Everybody is asking where I got it.”

“We have the friendliest people, ever,” she said. “Kids are hungry but no matter what, they still have the biggest smiles on their faces.”

Read more stories about your neighbors

GET TO KNOW US

Your ticket for the: Whitehall refugees staging fashion show to share native cultures